Presenting the full album of Speeders and Circuit Boards

It all takes me back thinking about the past and how this music got started. I was alone, in a dark apt with my old Packard Bell 75 MHZ computer and computer software. I started on tracker programs and made many hours of music with that computer. It's time to tell the story, dark foreboding or unique, heavy beats and EBM revisiting. Showing music the way I create it, not the way It should be made. I didn't learn how to make electronic music from tutorials, but felt my way through the experience. CRT is that story, not just a story but a journey of 17 years of doing electronic music.

The progressions over the years have gone from the minimal to the extreme. CRT will be another 3 letter wording that means more to my music process. The journey backwards and coming back to my roots instead of continuing where I am now. It will be an album that has gathered information over the years, from album to album and single to single. The constant flux of ideas and now placing myself back in that apt again. I'll be using the very software I was during those days. Fasttracker II, a DOS program that is still used even this day by some musicians, will be my only tool. There is something about that old interpolation sound that runs deep in the 16 BIT realm of music making. A process that I'm not sure where it will take me, and in that process I'll have some songs that were never released during those times of using tracker software.

I could always use Renoise but I want to re-experience the memory of what it felt like to make electronic music for the first time. I released a few years ago an album called Millennium Rewind, and it has many of those first songs from 1998 - 2000. It is quite fitting to do this and I've been searching for weeks on where to go next. This is the door that I'm opening and willing to take to find myself again musically. More on that later.
Posted by Almark at 10:44 PM No comments:

It started around Feb 2017, when I began writing another batch of material. After the long writing process of a studio album 'The Scheme of Things' I found new music being developed. This year is a completely different mindset on these songs. Different life, and no stress. Though various feelings and emotional troubles did get these songs started. Budgie came first, then Pinholes, Constellations, and finally travel. All of these songs are a balance between one another, as I'm moving into a more ambient-like progression. Cinematic is still taking a big part in the sound through. Budgie brings to life the sounds of the jungle, like listening to some Discovery channel nature show. Coming next was Pinholes, a very different approach from all pieces came forward, fragmented music, strange reverse like sounds. Then I released Constellations, which is the reverse of Pinholes. Around April I released Travel. The intent was completely separate from the other 3, using a real track of riding on a train, coupled with ambient-like over-tones and melodies, droning throughout, flowing with the natural rhythm of the clack of the tracks. Soon to begin other material such as Afterglow, Slope, Protection and North. These all mean something symbolically. Until next time.
Posted by Almark at 11:35 PM No comments:

Email ThisBlogThis!Share to TwitterShare to FacebookShare to Pinterest
Posted by Almark at 11:24 PM No comments:

With each season, new music is written and this year starts off with two so far. To continue in the tradition that I have come to enjoy, more material is yet to come. These start off with Budgie and Pinholes. Cinematic electronic music has become a real love for me as far as music creation is concerned. It's back to using raw sampling again to create new textures. Finding that timbre of sound and otherworldly element is what brings me deeper into the creative process. Jumping headlong into what sounds good emotionally is what I always enjoy doing. When you have a small audience, you need not try to please anyone but yourself. It's good to have so few who listen, but those who do listen, understand the depth of what is happening with these albums. Pinholes is a strange single that displays no malice to sound, but its dream-like reverse melody makes the song come to life as it continues to evolve up to the end of its fade out. Budgie puts you right in the jungle with its film-like motion. It's akin to past singles such as Wow-and-Flutter, but more flighty in motion, much like the bird sounds toward the end. I plan to continue down this new pathway of sound and more singles will indeed be coming forth, one such is slope. Until next time.
Posted by Almark at 3:22 PM No comments:

Being a song writer is part of the joy of making music. Before I began with electronic music, I was writing guitar music in the early 90s. Over the years a shift has occurred from album to album. 'The Scheme of Things' moved into the song writing element more than before. -ATD- was the approach of 'can I make a themed album that was influenced by the 80s and soundtracks. But with 'The Scheme of Things' it was an entirely different approach. "Let's see where this takes me", I said. Each song is crafted to compliment the next. I believe that song writing in Electronic form allows for an organic way of doing things. It's much like how the greatest of songs were written in the 70s and 80s. They put their entire soul into doing things in the studio. People have come to appreciate this style of music I release. To continue down that same path is only to make the next work more fulfilling. These days I no longer have a past endeavor that took nearly 2 years to do on my shoulders. I can breathe easy and let the music take me places. This song writing style has developed over the years and one song from 'The Scheme of Things' in particular would be 'Aura' that takes me there. There is some kind of R&B flavor happening here, perhaps it is due to what I grew up to, Hall and Oates, Soul music and now those things are once again coming back as childhood influences. Electronic music doesn't have to be 'cut and dry' it can be organic and it needs to be a free spirit, otherwise it cannot move into new progressions. The latest work in development is finding its way into the experimental realm/progressive mode. It appears that a new single is underway, and we're going back to the time of -ATD- motifs and moods.
Posted by Almark at 7:50 PM No comments: 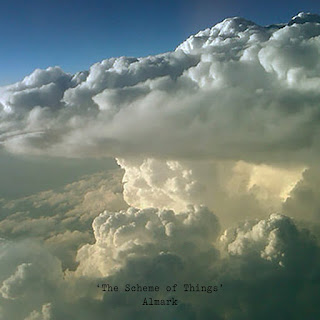 Posted by Almark at 1:12 AM No comments: